This document provides guidelines and technical requirements for creating a Terragraph network design, and is intended for network infrastructure engineers. Some details are only applicable to Meta hardware reference designs.

Terragraph utilizes a hierarchy of different physical and logical elements to create a network topology. These network elements consists of nodes, sectors, sites, and links, and are described in further detail below.

A node is a general purpose compute unit that controls one or more sectors. Puma nodes support up to four sectors.

There are two different types of nodes:

A sector is a wireless baseband card attached to a node.

A site is a logical element referring to the physical location at which one or more nodes are installed. A site is considered a fiber PoP when the Primary-DN at the site is interconnected to a provider's IP network.

A link is the logical element that defines the relationship between two sectors or nodes. There are two different types of links:

The network prefix in Terragraph is usually a /56 allocation, which is further divided into /64 prefixes to be assigned to individual nodes. The network prefix bounds the maximum possible number of radios in the deployment. A /56 network, for example, will yield 256 distinct /64 allocations.

Where possible, it is advisable to choose a network prefix space much larger than the anticipated number of deployed nodes (e.g. to account for future network expansion), and which yields at least twice as many allocations as the number of nodes (e.g. to support network-wide address reassignment). Below are some commonly used IPv6 network prefixes used in Terragraph.

Each Terragraph node is assigned an IPv6 /64 prefix as the loopback interface. This loopback interface address is used by the E2E controller to address the node. Prefix allocation to the nodes can be done randomly or centrally through the E2E controller. The /64 address prefix also enables the node to address downstream CPEs using Stateless Address Autoconfiguration (SLAAC) via router advertisements or DHCPv6.

Terragraph is an IPv6-only network. To support IPv4 traffic, the use of Layer 2 Tunneling, NAT64, or DS-Lite is recommended.

For large Terragraph deployments (greater than 1.0 sq. km), the network design should be broken down into smaller, more manageable sections called "areas". Using the area technique has the following benefits:

The recommended area breakdown is as follows:

Below is a recommendation on how to design a Terragraph network. This is a high-level overview, and subsequent sections provide more detail on how to accomplish many of these steps.

Terragraph has the following limitations:

The number of fiber PoPs needed in a Terragraph network is based on the throughput and redundancy requirements of the network. It is recommended to disperse fiber PoPs throughout the network to maximize performance and to allow for geographical redundancy in case of a failure — that is, under a fiber PoP failure, traffic should flow to an alternative fiber PoP.

The following points concern the wireless links at a fiber PoP site:

The location of fiber PoPs should be determined as follows:

Terragraph is a line-of-sight (LOS) wireless technology, which means that the path from one sector to another should be clear of obstructions. If LOS does not exist between two potential sites, then alternate sites need to be found.

There are a variety of RF and microwave planning tools that can be used to design a Terragraph network. Meta has utilized Google Earth to create visual representations of the network topology, as it allows for a network to be quickly designed while offering access to satellite and street imagery. Depending on the location, Google Earth provides high-resolution imagery which should help identify any LOS issues missed in the site survey phase. In addition, Google Earth can be used for the following tasks:

For additional information on Google Earth for network planning, refer to Appendix A.

In upcoming releases, Terragraph will allow importing a CSV-format topology containing a list of sites, sectors, and links. The CSV structure has not yet been finalized.

All potential Terragraph sites need to be physically site surveyed to provide the proper data during the initial network design. The site survey should evaluate all the following criteria:

Note that the LOS survey should be completed first, followed by a mechanical survey and electrical circuit tracing.

The LOS survey is one of the most important aspects during the site survey process. Even if there is a seemingly perfect location for a Terragraph node, the site can not be utilized unless there is LOS to other nearby sites.

There are two types of LOS surveys:

The important aspects to consider during LOS surveys are as follows:

During a site survey, the field engineer should capture sufficient information to allow for an initial network design which will likely be completed by another engineer at a later date. Additionally, it is important to capture information required for permitting, as permits and leases (or equivalent) will likely be necessary for most deployments given that Terragraph infrastructure is deployed across public assets and private right of ways.

It is recommended to use a high resolution camera with optical zoom capability to capture site images and details during the site survey process.

At minimum, the field engineer should do the following: 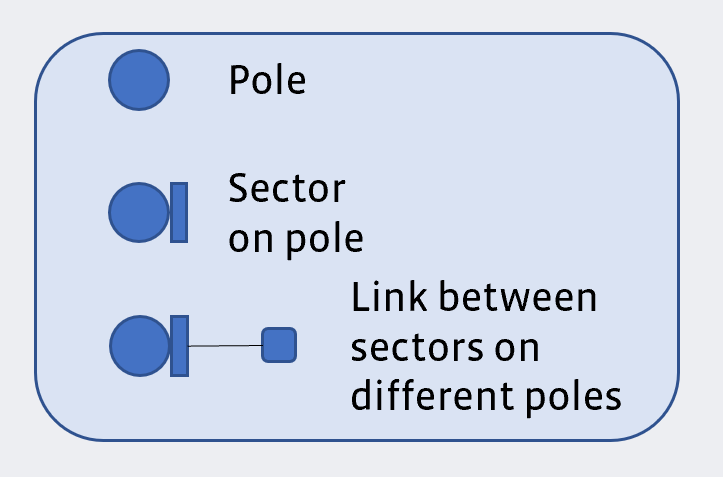 When installing multiple sectors at the same site the angle between links from the different sector nodes should adhere to the following guidelines:

When the links formed by adjacent sectors on the same pole must differ significantly in distance, the following guidelines help to maximize performance:

A near-far link uses more power to overcome interference from the high power required for the long link. This creates more interference and raises the interference profile of the whole network.

The same Golay code is used for all links in the butterfly P2MP topology. Early weak interference is an interference that is weak enough to not create any Signal to Interference-plus-Noise Ratio (SINR) degradation, but still creates a blocking effect on the desired packet by locking the receiver before the arrival of the packet. Early-weak interference can be predominant, especially with tight angles. DN→DN and DN→CN should have a minimum of 15°.

Y-Street (One DN in P2MP Configuration)​

In a network topology with an odd number of sites in a loop, sectors at one of the sites must operate in a hybrid mode. Hybrid mode indicates that sectors at the same site operate with different polarities. Links that need high wireless capacity, such as the first few hops away from a PoP node, should avoid using the hybrid polarity feature.

When an odd loop exists and a hybrid sector must be used, a site can be either a hardware hybrid or software hybrid depending on the following conditions: 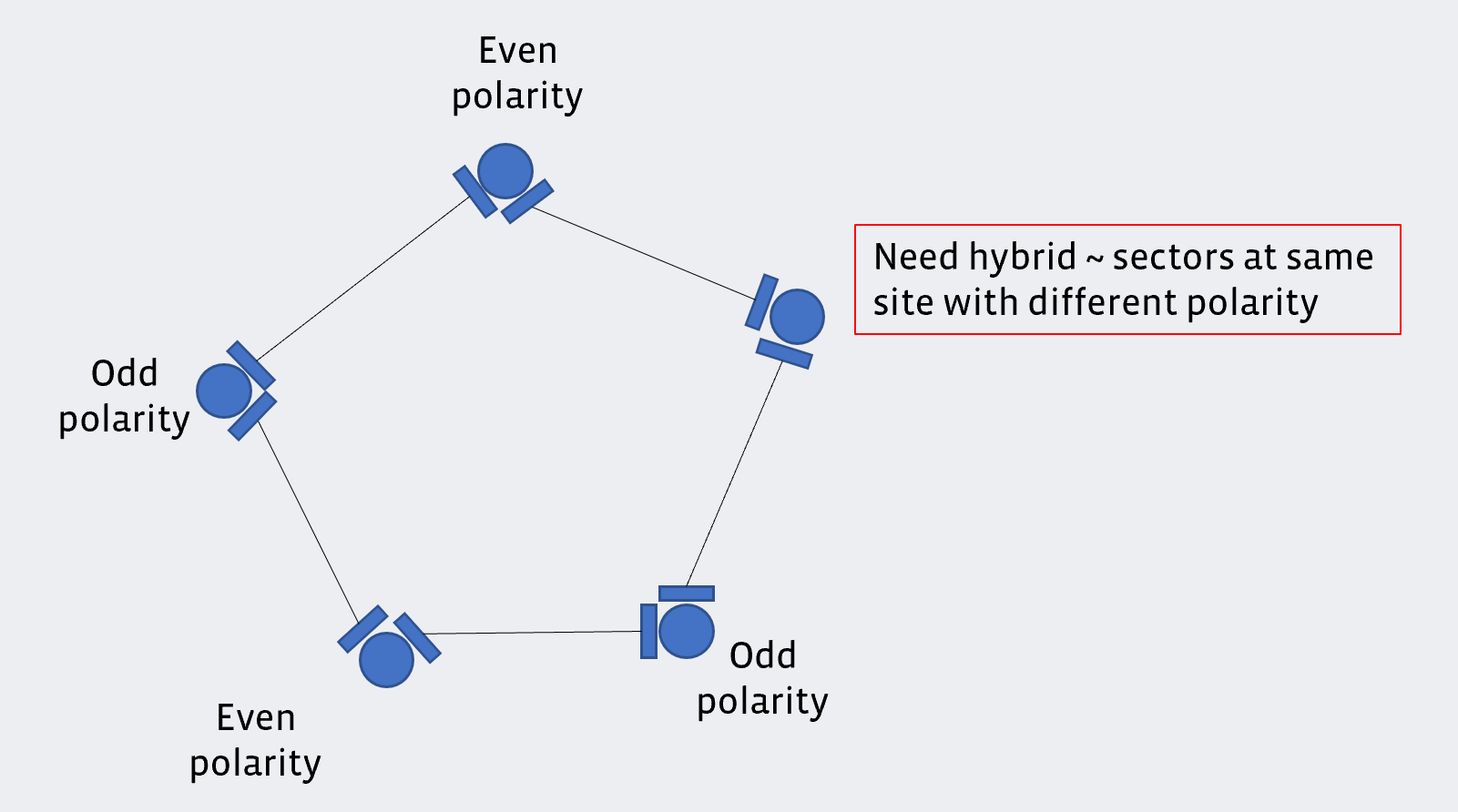