This document describes the testing and measurement capabilities of Terragraph.

Association between two Terragraph nodes begins with initial beamforming. Initial beamforming does a sweep of transmit (Tx) and receive (Rx) beams on a coarse, 2x grid, aiming to find the best combination of beams in terms of SNR. Those beams are used when the link is associated.

A scan is an opportunity to measure SNR and interference and optionally to refine beams once the link is associated in a dedicated time slot. Scans are done for multiple reasons:

During a scan opportunity, there is typically one transmitter (initiator) and one or more receivers (responders). The initiator and all responders sweep over a set of beams and report results back to the E2E controller. The initiator report contains only metadata about the scan; the responder report includes the measured SNR and RSSI for each Tx/Rx beam combination. SNR can only be measured if the receiver is able to detect the packet; the receiver sensitivity is around -10dB SNR.

Scans are initiated by an E2E controller command or API call. By default, no scans are run.

IBF scans are run by the firmware during ignition, without involving the E2E controller. The scan finds a good beam angle, but not the "best beam" because it needs to complete quickly. IBF runs using the maximum allowed transmit power.

IM scans measure interference between nearby nodes (not necessarily connected by a link). These use the same transmit power calculation as PBF.

In contrast to PBF, which attempts to find the best beam angle based on a fine grid, RTCAL makes very fine adjustments to the antenna weights without changing the beam angle. Consider the following analogy — if Terragraph were a movie projector, then PBF would angle the projector until it faces the screen directly, and RTCAL would make fine adjustments to the focus (but the angling is done electronically, without motors).

RTCAL scans are not supported in QTI firmware. Instead, a combination of PBF scans and MTPO (multi-tile phase offset) calibration is used to achieve the similar goal of adjusting the inter-tile phase offsets to maximize beamforming gain of the antenna array.

CBF scans (i.e., Interference Nulling scans) are used to reduce interference. These scans are not currently supported in QTI firmware.

The amount of time it takes to run a scan for the entire network depends on the network topology. For a network with approximately 20 or more nodes, scans will typically take on the order of 10-20 minutes, but this depends on the specific locations of the nodes because of the Scheduling Groups described below. Generally, the time it takes to complete a full-network scan does not depend on the size of the network once the network reaches over 20 nodes because scans run in parallel.

This section will explain how scans are scheduled and why it takes tens of minutes to complete a round of scans for the network.

At a high level, a ~52-second slotmap is defined. Within a slotmap, there are typically one or two opportunities to run a given scan type (e.g., PBF or IM). Scans can run in parallel on different Terragraph nodes, but only if the two scans do not cause RF interference with each other. A full network scan can take tens of minutes because several slotmaps are needed to cover all nodes in the network.

Scans can be initiated manually for a single link (for debugging), but they are more commonly scheduled periodically for the entire network (e.g., every 6 hours). Scans need to be scheduled according to certain constraints, and a node cannot perform more than one scan at a time. Because scans involve a sweep of beams, simultaneous scans should not be run on nodes that are close to each other in order to avoid erroneous measurements. For example, during a PBF scan between nodes A→B, a simultaneous PBF scan between nodes C→D would only be scheduled if nodes A and B are physically far away from nodes C and D.

A slotmap is defined to coordinate scan scheduling as shown below: 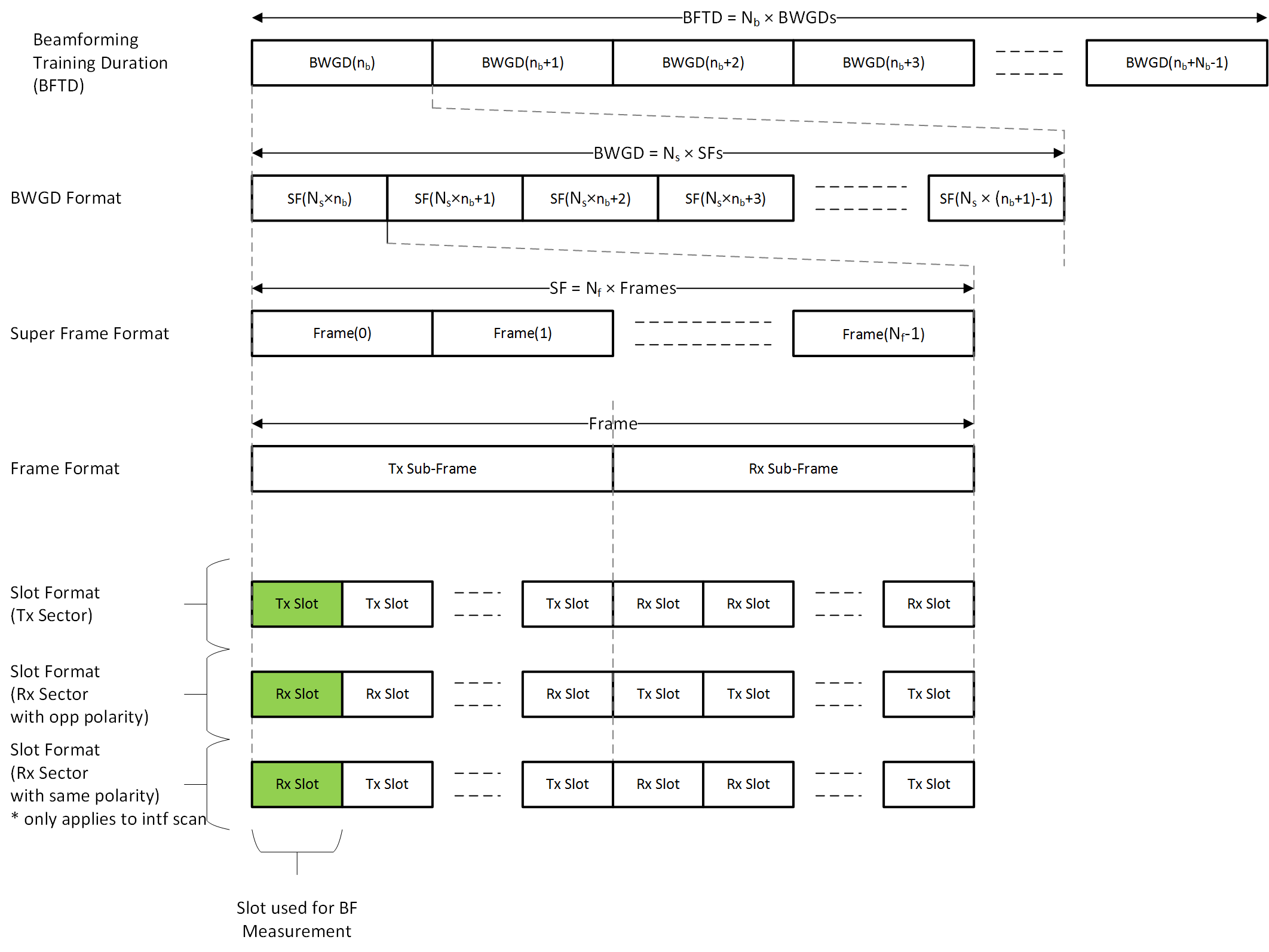 An example slotmap is shown below for the different scan types.

For example, two PBF scans can run in each slotmap. The slotmap is configurable.

Multiple scans of the same type (e.g., PBF) can run at the same time on different links/nodes in the network in groups. But nodes within a group have to be separated by a minimum distance to avoid interference. The distance is configurable (e.g., 350 meters). The E2E controller calculates scheduling groups based on GPS coordinates and the configured distance.

A manual scan is a one-shot scan (either for a particular set of nodes or once for the entire network), used primarily for debugging a link. Scans can be manually initiated using the TG CLI:

Scans can be automatically initiated by the E2E controller on a schedule set using the TG CLI:

Scanning impacts network performance for the short duration of a scan (between 51ms and 1.6s depending on the scan type), and should be run infrequently (typically every 6 to 12 hours). During a scan, ~60us time slots (shown in green in the slotmap definition figure above) are reserved for scans and therefore not used to transmit data; in the 200us subframe, this is approximately a 30% overhead. Depending on the scan type and network topology, a scan can also cause interference on neighboring links that are not involved in the scan. This is because a scan sweeps over multiple beams and therefore can directly transmit energy in a direction other than the associated link(s). Interference will not have any long-term impact but can, momentarily, cause a reduction in data rate on neighboring links.

By default, the controller initiates PBF, RTCAL, and CBF scans every 4 hours (defined in /etc/e2e_config/controller_config_default.json).

Completed scan results are processed by Query Service, and can be viewed in the NMS.