Beamforming (BF) is the process of using signal propagation information between two antennas and modifying antenna characteristics to maximize the signal quality between those antennas. The BF process accomplishes this in a few discrete states, including passive acquisition, active signaling, and continuous refinement.

The Glossary collects the acronyms and defines the terms used in this document.

There are five link states: Link Down, Link Unstable, Link Acquisition, Link Up, and Link Up with Simultaneous Reacquisition. Figure 1 illustrates these states and the transitions between them. This link state machine exists independently for each link of a node. 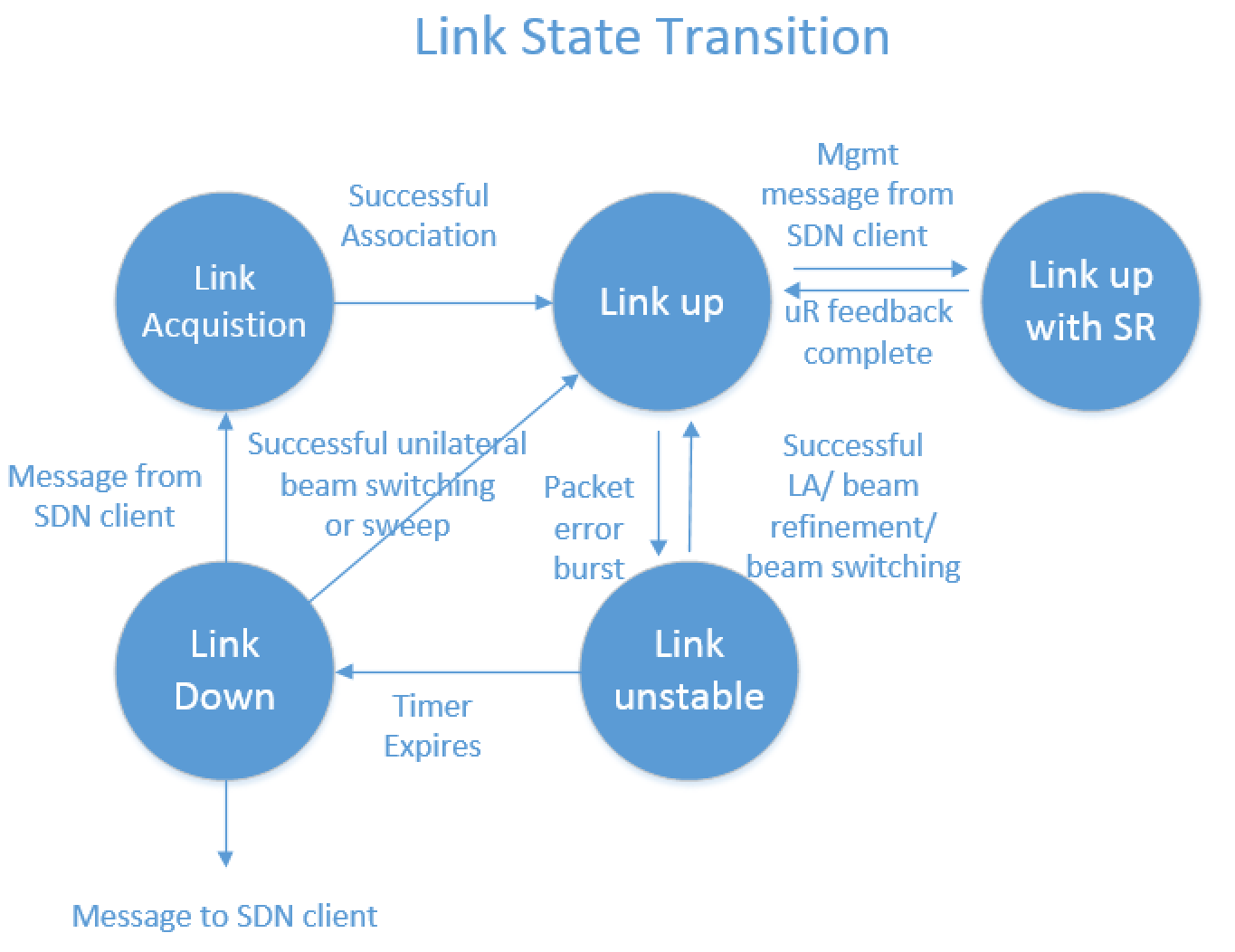 Table 1 summarizes the procedures associated with each link state and the purpose of those procedures.

This is the initial state for the link. A node initializes the link information and transitions to the Link Acquisition state as a responder.

A CN always performs the responder role during beamforming procedures in this state. A DN enters the link acquisition state upon link initialization or when directed by the E2E controller while in the Link Down state. The DN always performs the responder role when entering the link acquisition state after link initialization. The DN performs the initiator role only when directed to enter this state by the E2E controller. After successfully completing the beamforming acquisition procedure and association with the neighboring node, the link transitions to the Link Up state.

In this state, both DN and CN monitor the link quality for variations causing decreased signal quality or increased packet error rate. Based on the variation of signal quality or packet error rate, the node performs link adaptation or micro-route reordering. Periodically, the node performs beamforming reacquisition. On direction of the E2E controller, the node transitions to the Link Up with Simultaneous Reacquisition state. On detection of a packet error burst exceeding a preset error threshold for which link adaptation or micro-route, reordering is unable to correct, the node transitions to the Link Unstable state.

Link Up with Simultaneous Reacquisition State​

In this state, the node performs beamforming reacquisition under the direction of the E2E controller. After completing the beamforming procedure, including the exchange of new micro-route ordering, the node transitions to the Link Up state. 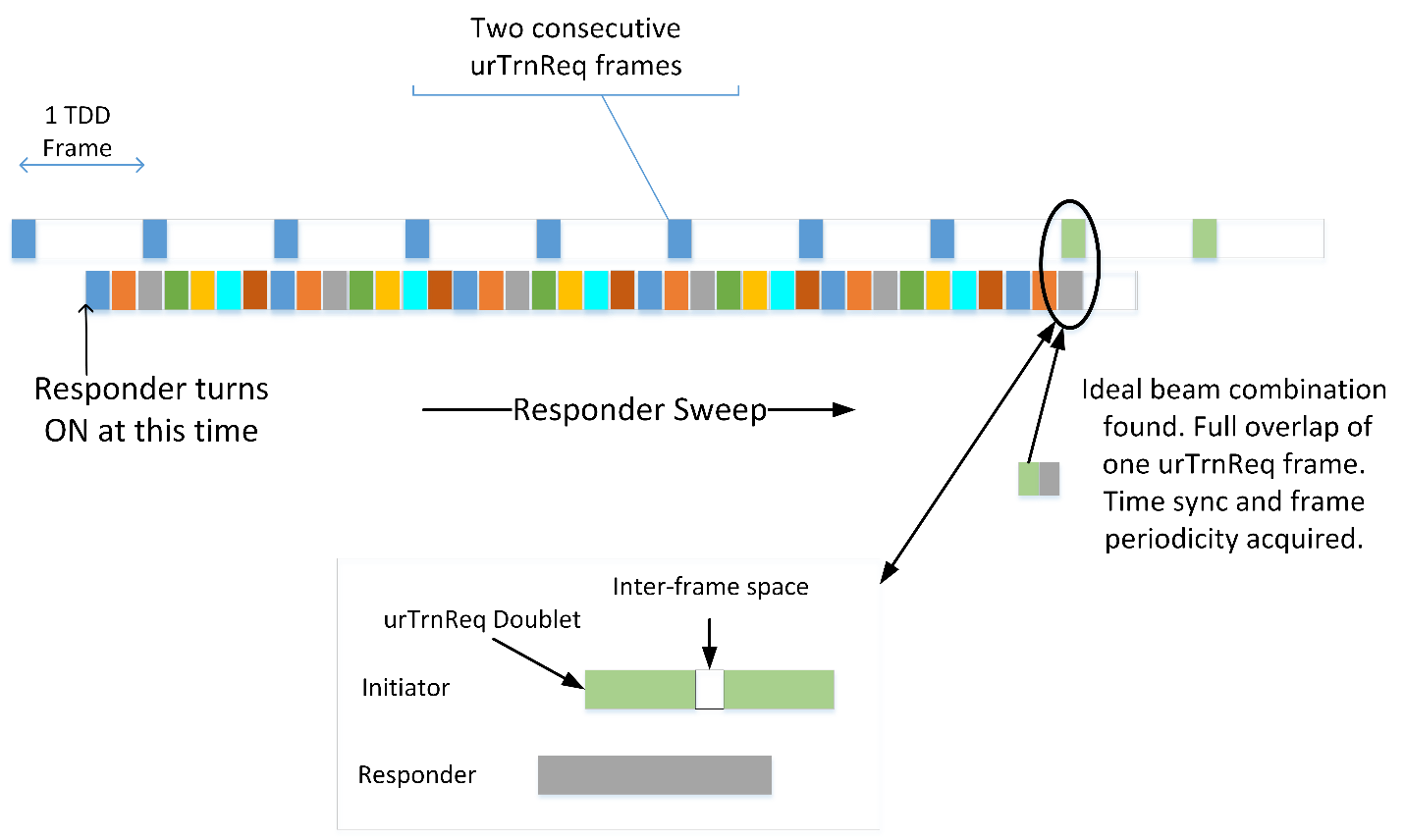 The acquisition and re-acquisition procedures involve testing N_i transmit and N_r receive beam combinations. Figure 3 illustrates this procedure. The procedure assumes link reciprocity. The initiator and responder shall send all frames in the control slot, the first slot, of a frame. 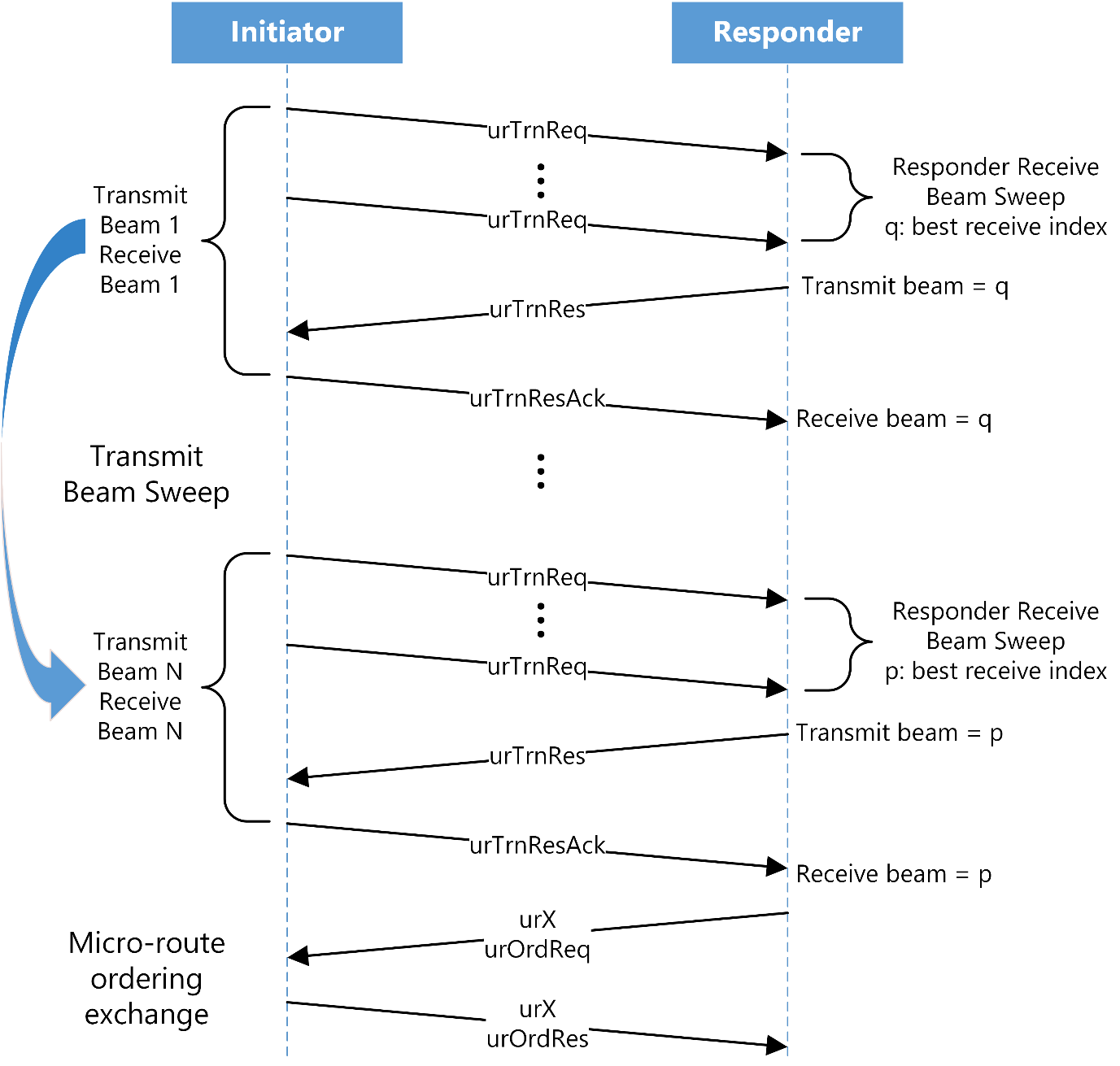 During the transmissions of the urTrnReq doublets with the final transmit beam index of the sweep, the initiator shall set the EndTrnFlag in the frame to indicate to the responder that this is the final set of transmit beam doublets.

The responder shall listen for urTrnReq frames in the first slot of the receive subframe of each frame, noting the value of FrmNumInBfWin that indicates the number of urTrnReq doublets transmitted with the same transmit beam index. Fifteen TDD frames after the time at which the last urTrnReq frame was transmitted, the responder shall send a Beamforming Training Response (urTrnRes) frame, indicating the index of the transmit beam of the initiator and the indexes and link quality of the receive beams for which the urTrnReq frame was successfully decoded.

The responder shall also track the value of FrmNumInBfWin, indicating how many urTrnReq frame doublets the initiator transmitted with the same transmit beam index. The responder shall send the urTrnRes frame 15 TDD frames after synchronizing with the initiator and after the FrmNumInBfWin indicates the last urTrnReq doublet with the same transmit beam index. 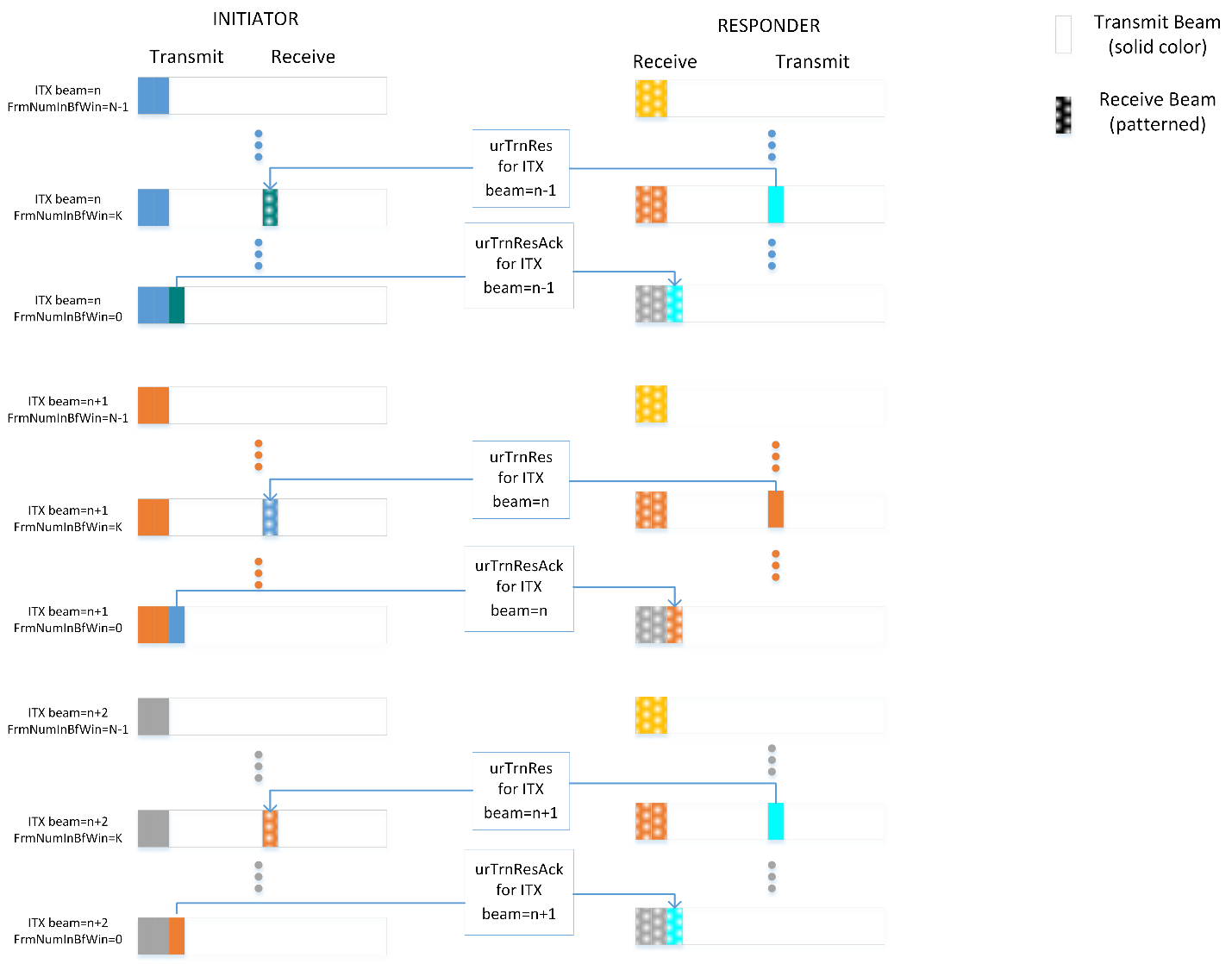 Figure 5 shows the end of the synchronous sweep and the micro-route exchange. 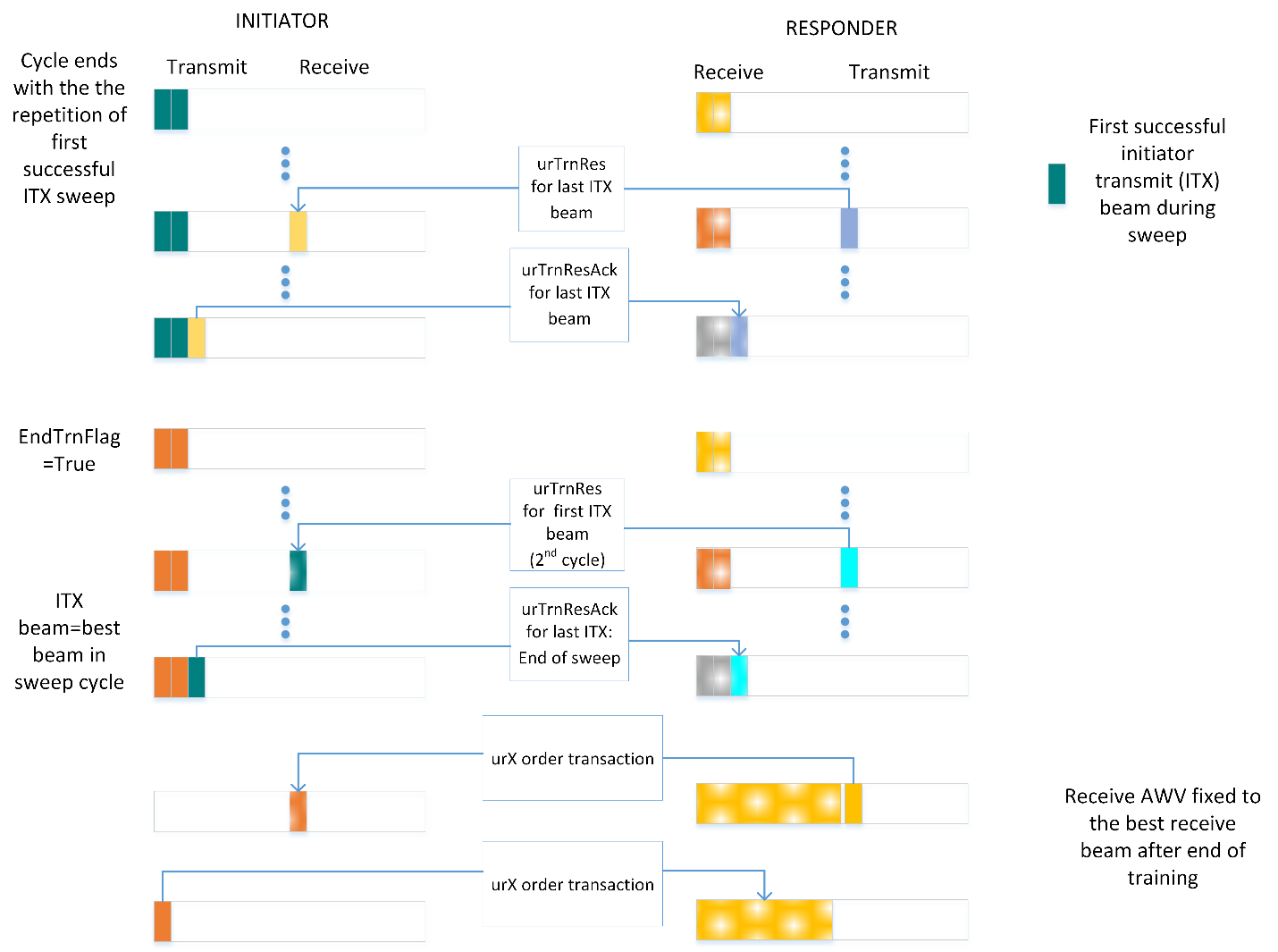 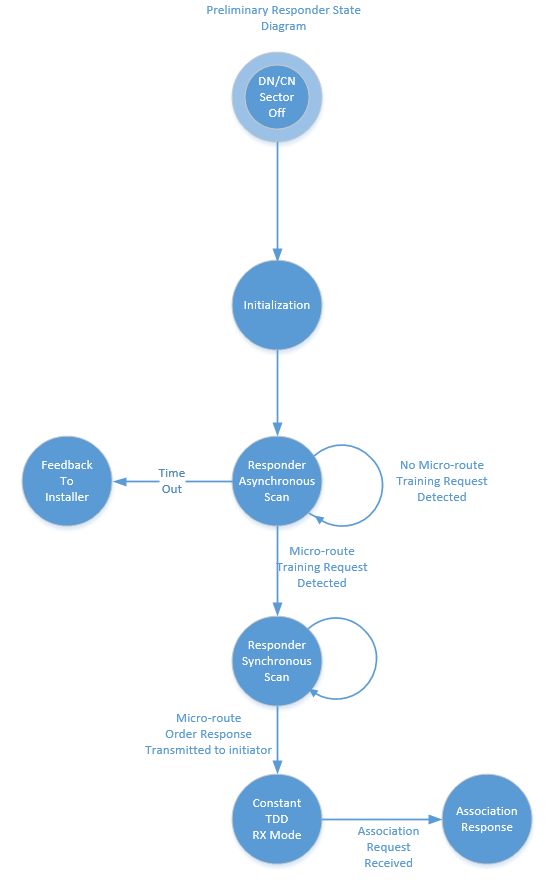 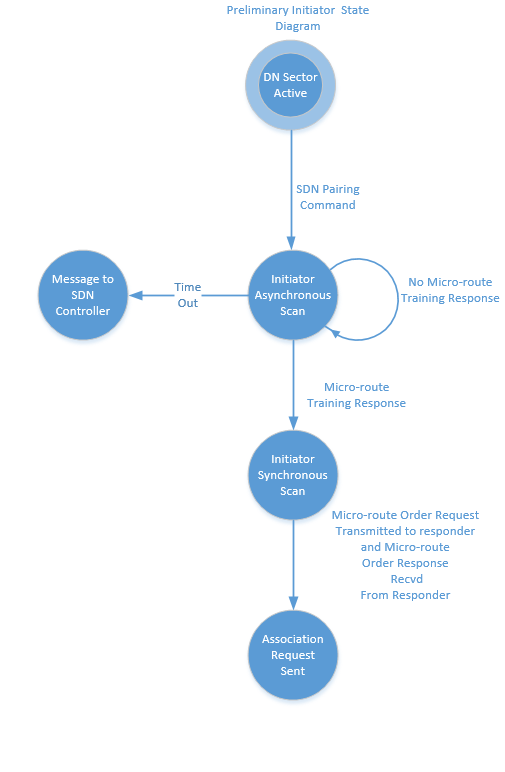 The periodic beamforming scan (PBS) acquires fresh information about the micro-routes between a single transmitter and a single receiver.

The E2E controller shall initiate the PBS by sending Scan Request Messages to the transmitter/receiver node pair selected to perform the scan, called the measurement set. Different from beamforming acquisition, PBS uniquely identifies the transmitter and receiver to each other by their individual MAC addresses and can indicate a subset of the micro-routes for scanning.

The MAC shall start the PBS at a bandwidth grant duration (BWGD) boundary indicated in the Scan Request message. The duration of a PBS varies, dependent on the number of beams scanned. This duration can be less than or greater than a single BWGD.

For the duration of the scan, called the Beamforming Training Duration (BFTD), the transmitter shall communicate slots reserved for beamforming to all associated nodes in the normal slot map exchange. The transmitter shall send urTrnReq training frames (see MAC & PHY Specification for frame details) for the PBS only in the first transmit slot of each frame for the BFTD. The receiver shall attempt to receive the transmitted training frames in the corresponding receive slot.

The PBS proceeds unidirectionally, from the transmitter to the receiver. Unlike synchronous beamforming, there is no exchange of urTrnRes or urTrnResAck frames between the transmitter and receiver and no exchange of micro-routes, urX frames, at the conclusion of the scan. The receiver sends feedback on the scan to the controller, when the scan is complete, using the Scan Response Message. 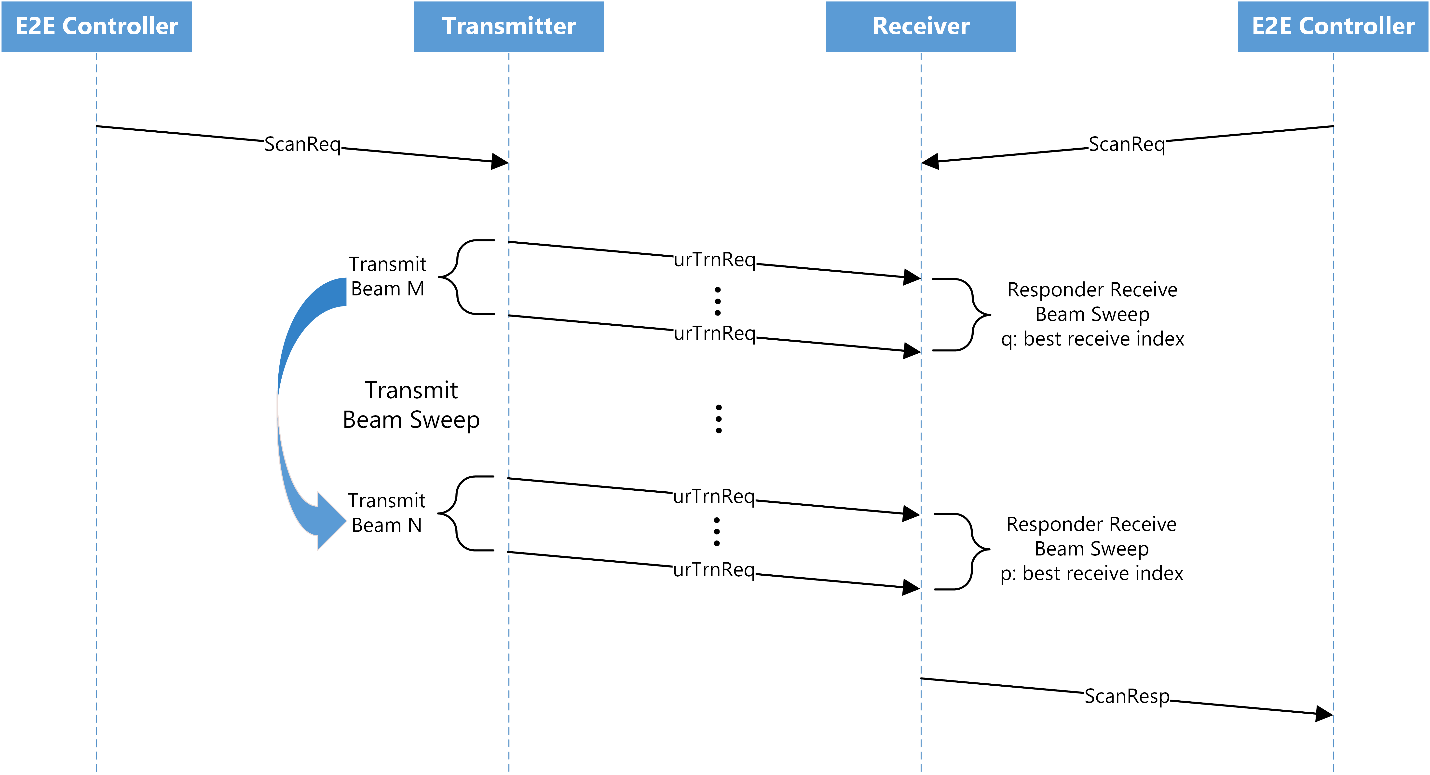 A scan of the beams selected for a PBS has a duration BFTD. The BFTD derives from the number of transmit beams, the number of receive beams, and the BWGD.

The node shall calculate BFTD, in BWGDs, as shown in Equation 1. 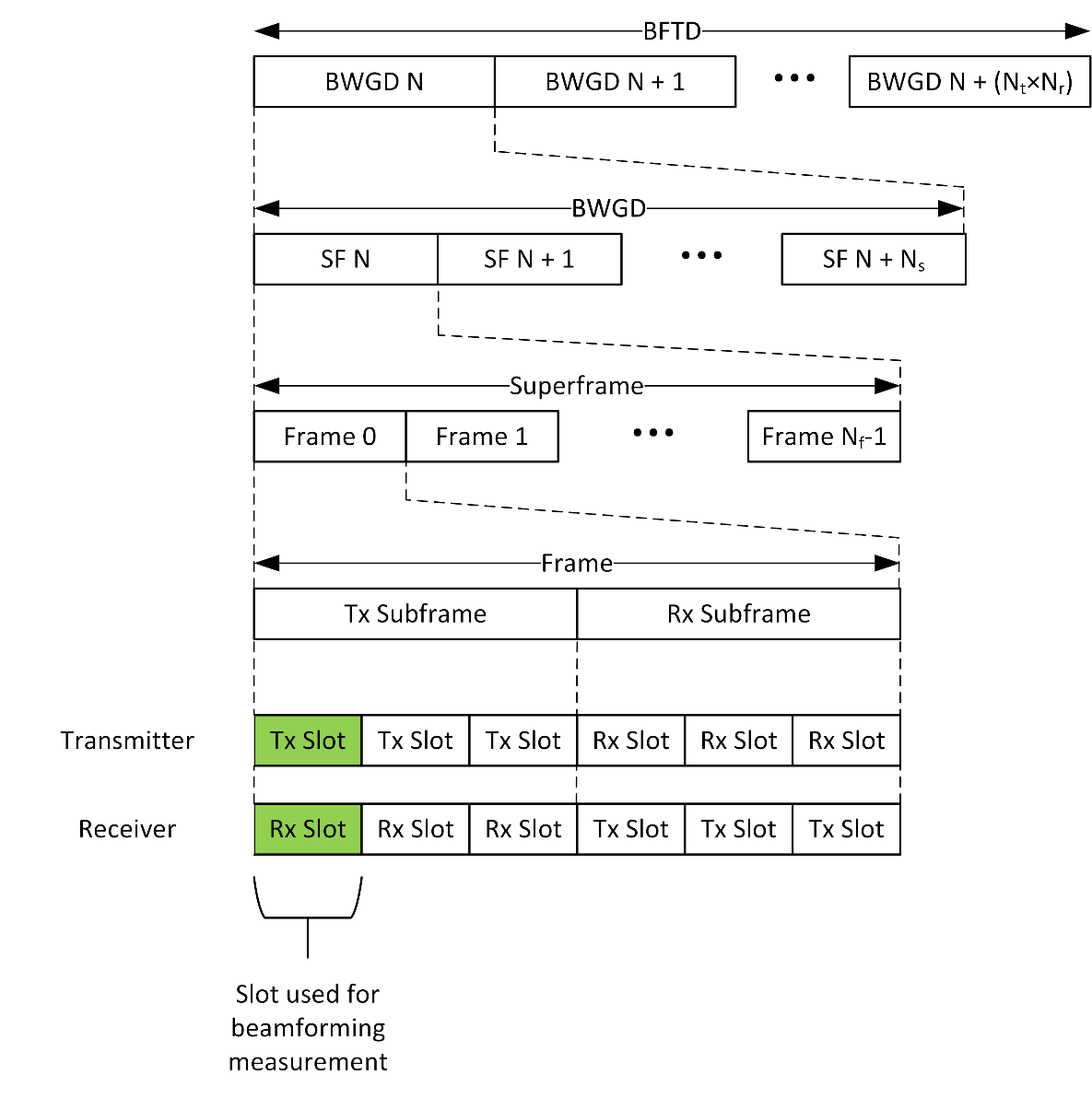 The E2E controller shall schedule PBSs such that the duration of an individual scan is significantly shorter than the period of the scans.

The interference measurement scan (IMS) uses the PBS mechanism with additional receivers to determine the interference caused by the transmissions of one sector on other sectors. The E2E controller directs each IMS between one transmit sector and one or more receive sectors in close geographic and/or angular proximity. The sectors involved in an IMS do not necessarily have link level connectivity. The sectors selected for the scan called, collectively, the measurement set, perform the scan as directed by the E2E controller and report the results back to the controller.

For the duration of the BFTD, the DNs in the measurement set shall communicate slots reserved for beamforming to all associated nodes in the normal slot map exchange. The transmitter shall send urTrnReq training frames (see MAC & PHY Specification for frame details) for the IMS only in the first transmit slot of each frame for the BFTD. The urTrnReq frames shall use the broadcast address as the destination address of the frame. The receivers shall attempt to receive the transmitted training frames in the corresponding receive slot. 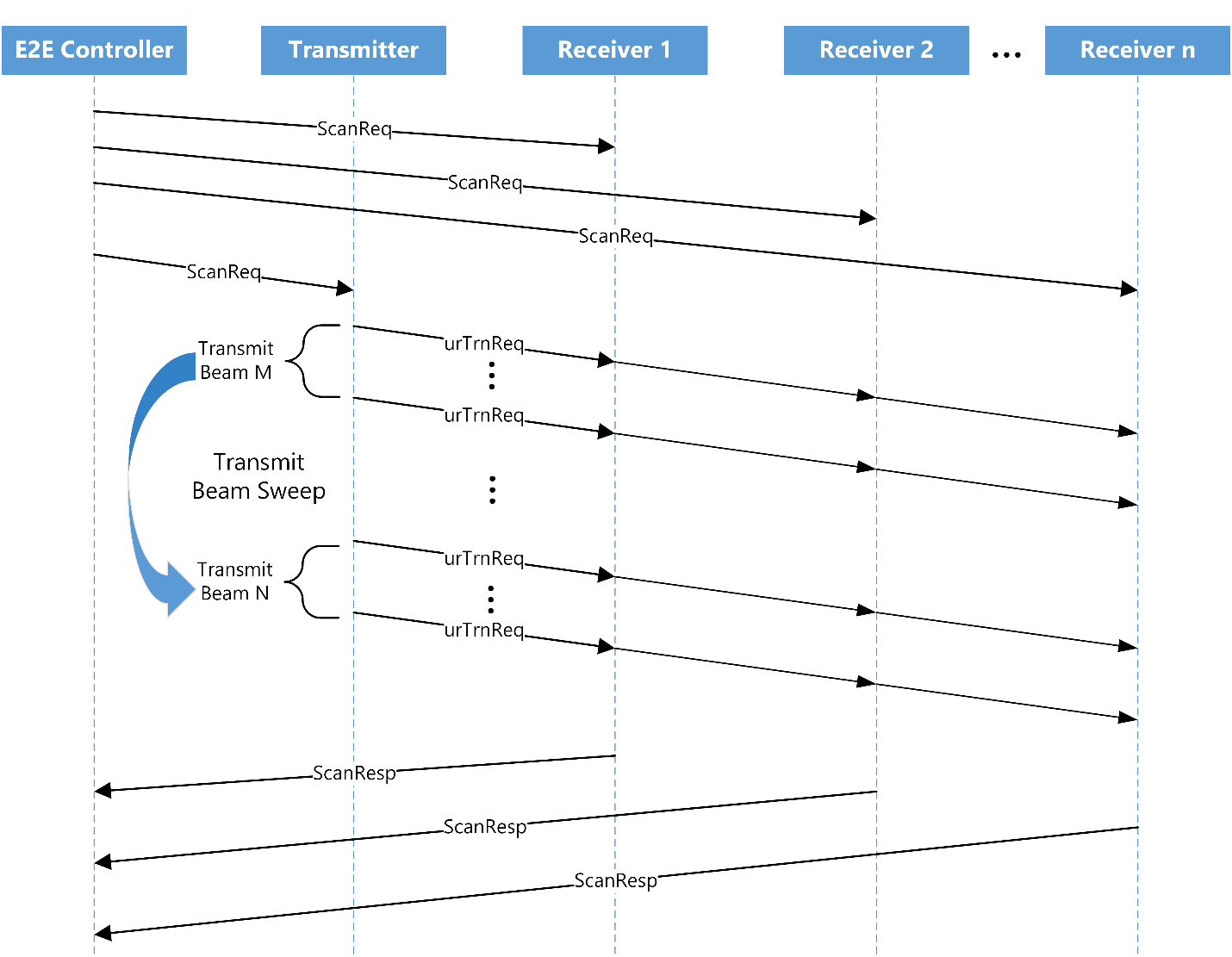 IMS Scheduling at the MAC​

The node shall schedule the IMS as specified in PBS Scheduling.

Scheduling Scans at the Network Level​

Individual PBS and IMS operations present little difficulty to schedule in an operational network, as they consume relatively small amounts of bandwidth over short periods. In a large network, however, it can be necessary to schedule several scans to be operating at the same time. In order not to have one scan interfere with another, it is necessary that a sector participate in only one scan at a time; that is, a sector can be a member of only one measurement set for which a scan is taking place. To facilitate the scheduling of parallel scans in a network, the controller determines a sector adjacency matrix, a list of measurement sets, and a scheduling exclusion matrix.

The controller shall compute a sector adjacency matrix, where the elements in the matrix indicate the possibility of the sectors interfering with one another. The sector adjacency matrix is a square matrix with the dimensions equal to the number of sectors in the network. Each element of the matrix, sector_adjacency_matrix(i,j), holds a binary value indicating that the sector i is adjacent to sector j, in the sense that the sectors could cause interference to one another. The controller can populate this matrix conservatively, initially, based on deployment measurements of distance, angle, and obstructions between sectors. As the controller conducts PBS and IMS, the controller can prune the adjacencies from the matrix based on these measurements.

The link adaptation procedure provides a method for a node to adjust the MCS and transmit power of a link to maximize the throughput of that link.

The node shall send the link adaptation feedback parameters to the transmitter in the Heartbeat, Keep Alive, and/or Uplink Bandwidth Request frames, as appropriate for the types of node at each end of the link.

The inner loop of the algorithm uses the result of the outer loop computation to offset the filtered SNR feedback from the receiving node to compute the "effective signal to interference and noise ratio (SINR)". The effective SINR and offset select the MCS for future transmissions to the receiving node. Figure 9 illustrates the transmitter link adaptation algorithm.

This phase of TPC occurs after the exchange of Micro-route Exchange frames at the conclusion of beamforming acquisition. In phase 1, the nodes shall attempt to reduce transmit power, using the received signal strength indication (RSSI) indicated by the peer node and returned in the Micro-route Exchange frame and a reference value for the RSSI expected at the peer node. If the RSSI indicated by the peer node is greater than the reference RSSI value, the difference between the two RSSI values is calculated. The algorithm reduces the difference to the maximum allowable power reduction step size, if the difference is greater than the allowable step size. In this phase, power the algorithm only reduces transmit power, as needed.

This phase of TPC occurs after the exchange of the Association Request, Response, and Response Ack frames. In phase 2, the nodes shall attempt to reduce transmit power, using the SNR value returned by the peer node in the Association Response or Association Response ACK frame and a reference SNR value for the MCS expected at the peer node to provide a high probability of error-free reception. If the SNR indicated by the peer node is greater that the reference SNR value, the difference between the two SNR values is calculated. The algorithm reduces the difference to the maximum allowable power reduction step size, if the difference is greater than the allowable step size. In this phase, the algorithm only reduces transmit power, as needed.

This phase of TPC occurs after the link between the peer nodes is active and the nodes exchange Heartbeat, Keep Alive, and/or Uplink Bandwidth Request frames. In phase 3, the nodes shall attempt to increase and reduce transmit power, as required, to maintain the peer SNR minimally greater than the reference SNR value. The algorithm speculatively calculates a power reduction value by calculating the difference between the peer SNR value and the reference SNR value.