This document describes the management of the network topology.

This section briefly describes the elements of a Terragraph network topology in the context of the E2E service.

The three basic topology elements are listed below:

Links have the following properties:

All topology structures are defined in Topology.thrift, and are contained within the parent structure thrift::Topology.

Currently, the properties captured by the thrift::Topology structure can be categorized as follows:

The network topology is provided to the controller as a file during startup, and can be modified during runtime through TopologyApp. All requested topology changes are validated, and the controller will automatically assign any additional parameters to a new node or link as necessary (discussed later). Most of the logic for topology changes resides in TopologyWrapper.

TopologyApp accepts the following user operations on the topology:

The topology is also modified upon receiving the following commands from other apps:

On startup and before any topology change, the controller performs thorough validation of all relevant topology parameters. Additionally, when new elements are added, the controller automatically assigns node and link parameters. These processes are summarized in the following table, with additional details in the sections below.

Controller-assigned parameters are stored in the automatic node overrides layer of the node configuration (can be overridden by user configuration if required), and are accessed and modified via ConfigHelper (refer to Configuration Management for further details).

For firmware parameters which cannot be dynamically changed (i.e. post-config action is RELOAD_FIRMWARE), any update to live radios or links will trigger a firmware reload. If dynamic changes must be synchronized across affected links (i.e. post-config action is SET_FW_PARAMS_SYNC_OR_RELOAD_FIRMWARE), then the change will be scheduled at a specific BWGD index as determined by the controller's GpsClock time plus a default delay of 5.12 seconds (controller flag --firmware_parameter_update_delay), with an additional firmware constraint that no more than 2 parameter updates can be scheduled simultaneously (otherwise firmware will be reloaded to apply all changes).

Polarity validation and assignment is handled by PolarityHelper.

Sectors on both ends of a wireless link alternate between transmitting and receiving in complementary time slots. This dramatically reduces interference, as nodes only receive very weak interfering signals from at least three hops away. To achieve this, each sector is assigned a polarity of ODD or EVEN.

This simple assignment scheme requires neighbors in the network graph to have opposite polarities, and only works if the graph can be bipartitioned. To support topologies with odd cycles, hybrid polarities can be used in two distinct ways:

In the sections below, "hybrid" will refer to software hybrids unless otherwise noted, since hardware hybrids are not treated differently from regular polarities in E2E.

Polarity is only relevant when links are formed. Thus, unspecified polarities are allowed on nodes until a link is added.

Currently, the controller will not automatically assign a hybrid polarity. Hybrid polarity must be explicitly set by the user.

The controller provides a mechanism to perform a network-wide polarity optimization, using the odd cycle cover (OCC) algorithm in OccSolver to find the minimum set of hardware hybrid sites required to achieve a bipartite graph. This operation is triggered manually via the TRIGGER_POLARITY_OPTIMIZATION command.

The polarity optimization process has the following features:

Golay index validation and assignment is handled by GolayHelper. Note that the controller will only assign Golay indexes 1 and 2 by default.

Every packet transmitted over the air in a Terragraph network contains a PHY layer preamble consisting of a Short Training Field (STF) and a Channel Estimation Field (CEF), as defined in the IEEE 802.11-2016 standard. The receiver uses the STF to detect the presence of a packet in the air and thus start the remainder of the packet acquisition process. Since the same preamble is used, irrespective of the Modulation and Coding Set (MCS) used for the data payload, the STF is designed to be detectable even at very low signal to noise ratios (SNR). As a consequence, a weak interfering packet will trigger packet acquisition, and any desired packet arriving while the receiver is busy attempting to decode the interfering packet will be missed. This is known as early weak interference and is especially apparent in Terragraph's current TDMA network design.

Both the STF and CEF are derived from a 128-bit Golay Code Sequence. To minimize the extent of early weak interference, different Golay Code Sequences can be applied to interfering links so that the receiver will only begin the packet acquisition process when it receives the expected preamble.

The procedure for assigning Golay codes to new links is detailed in Algorithms for Channel and Golay Assignment.

The controller provides a mechanism to perform a network-wide Golay reassignment to resolve any misconfiguration. This operation is triggered manually via the TRIGGER_GOLAY_OPTIMIZATION command.

Channel allocation is handled by ChannelHelper. Note that the controller will only use channel 2 unless otherwise configured by the user (via controller configuration field topologyParams.enabledChannels).

Terragraph networks utilize the 60GHz (V-Band) spectrum. In many countries, V-Band is unlicensed and allows for multiple GHz of RF bandwidth. The amount of available spectrum for use by Terragraph varies depending on local wireless regulations. Terragraph supports channels 1, 2, 3, and 4 in the 60GHz band. Each channel, as per the 802.11ad specification, is 2.16GHz wide as shown below.

The procedure for assigning channels to new links is detailed in Algorithms for Channel and Golay Assignment.

The controller provides a mechanism to perform a network-wide channel reassignment to resolve any misconfiguration. This operation is triggered manually via the TRIGGER_CHANNEL_OPTIMIZATION command.

Control superframe validation and assignment is handled by ControlSuperframeHelper.

Normally, in the P2P (point to point) scenario, the control superframe can be left unspecified and will be handled automatically by the firmware; this is equivalent to using the value 0. However, with P2MP (point to multi-point), the nodes at the opposite ends of the two links have no way to automatically pick non-conflicting control superframes. The primary role of E2E is to assign non-conflicting values (i.e. 0 and 1) across these links.

The controller provides a mechanism to perform a network-wide control superframe reassignment to resolve any misconfiguration. This operation is triggered manually via the TRIGGER_CONTROL_SUPERFRAME_OPTIMIZATION command.

The reassignment process has the following features:

Airtime allocation is handled by BandwidthAllocationHelper.

The default airtime allocation on each node can be overridden through the thrift::NetworkAirtime structure, which defines a per-link map of the minimum, maximum, and ideal transmit/receive percentages. This can be used, for instance, to enforce fair resource allocation across the network topology.

This feature is a work in progress and is not currently enabled.

If automatic airtime allocation is enabled, TopologyApp will recompute the fair airtime allocation map on startup and whenever the topology is modified. The controller sends any airtime changes to nodes using the SET_NODE_PARAMS (NETWORK) command.

The airtime computations currently consider only the network graph and perform simple shortest-paths computations to POP nodes. The algorithm does not yet take routing into account.

Algorithms for Channel and Golay Assignment​

The algorithms for assigning channel and Golay codes based on interference estimates are handled by InterferenceHelper.

There are 4 observed heuristics that affect interference which the new link assignment algorithm attempts to mitigate:

Currently, only link adjacencies and angle differences are used to assign Golay codes and channels for a new link. 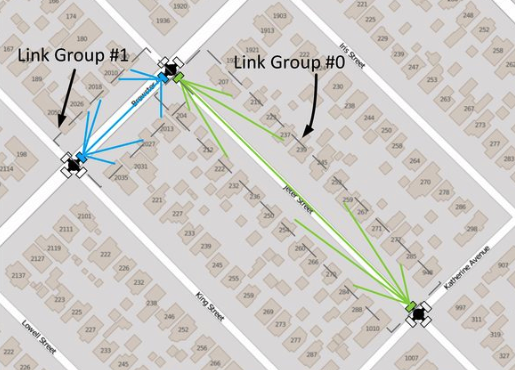 Next, the controller constructs a graph in which the vertices are the previously-identified link groups. An edge is added between any two groups with a non-zero interference estimate.

The resultant graph is the group interference graph. The task of assigning Golay codes/channels to different groups is equivalent to solving the graph coloring problem using a number of colors that is equal to the number of available Golay codes or channels.

Since only two orthogonal Golay codes are available for allocation the odd cycle cover (OCC) algorithm is used to convert the graph into a bipartite graph by removing the least number of groups while minimizing the overall network interference. This uses the same OCC algorithm as the one for polarity optimization. Channel assignment also uses this algorithm to attempt to minimize the number of channel allocations that add to the overall network interference.

Any predetermined Golay codes/channels within the node configuration overrides are assigned first. These manual configurations can be ignored and overridden by setting the clearUserConfig flag.

Finally, Golay codes/channels are assigned for the groups identified by the OCC algorithm. In this case, the Golay code/channel that minimizes the overall interference experienced by the link group is selected.

Node state is managed by StatusApp on the controller and minion. The minion sends STATUS_REPORT heartbeats at regular intervals to the controller, and includes details such as its ignition/configuration/upgrade state and software/hardware versions in these heartbeats. The controller replies with STATUS_REPORT_ACK acknowledgements. If the minion does not receive any acknowledgements or other messages from the controller within a specified timeout period, it will attempt to tear down the current network socket to the controller and reconnect (refer to Communication Protocol for further details). Meanwhile, TopologyApp periodically computes all node liveness states based on the last time a heartbeat was received from each node.

All nodes initially boot into the OFFLINE status. For each radio, the minion's StatusApp sends a NODE_INIT message to its DriverApp containing initial firmware parameters, then starts sending heartbeats to the controller upon receiving any NODE_INIT_NOTIFY success notification from DriverApp. The minion then sends a FW_SET_NODE_PARAMS message to the driver with polarity, channel, and airtime parameters from its node configuration (if present), and also a GPS_ENABLE_REQ message to enable GPS (if applicable; read below).

When the controller's StatusApp receives a heartbeat from a node with an OFFLINE status, it sends a SET_NODE_PARAMS_REQ request to TopologyApp, which then sends SET_NODE_PARAMS (INIT) message(s) to the minion's StatusApp (one message per WLAN MAC address). Upon receipt, the minion marks itself as ONLINE (if GPS is disabled) or ONLINE_INITIATOR (if GPS was already enabled). If the node had not already configured its polarity, channel, etc. during initialization (i.e. the parameters are not in the node's local configuration file), it does so now with the parameters sent from the controller. The controller's StatusApp will also request the status of the node's wireless links at this time.

For DNs, transitioning to ONLINE_INITIATOR requires enabling GPS to achieve time synchronization. This requires knowledge of the node's physical site location. Periodically, TopologyApp looks for DNs that are ONLINE and does the following:

Wireless link state is managed by IgnitionApp on the controller and minion. Every time the status of a wireless link changes, the minion sends a LINK_STATUS message to TopologyApp. In some cases, the controller's TopologyApp, IgnitionApp, or StatusApp will actively request a link status by sending a GET_LINK_STATUS message. If the controller receives a LINK_UP event for a link which does not exist in the current topology, it will forcefully disassociate the link. When the controller receives a LINK_DOWN event for a DN-to-DN link where either side is a P2MP DN with other active links, it will disable BF responder mode to avoid throughput loss on these links. Refer to Network Ignition for further details about the link ignition process.

Wired intra-site link state is maintained by StatusApp on the controller and minion. Each minion's status report contains status of its wired connections. When this status changes, the controller's StatusApp sends a SET_WIRED_LINK_STATUS message to TopologyApp. Wired inter-site link state is not checked, and these links will always appear as alive.

The controller uses its local clock for scheduling (e.g. scan commands, firmware configuration changes). To ensure its clock is synchronized with GPS-based node clocks, the controller updates its clock based on GPS timestamps sent from each node.

GpsClock is a custom clock used to hold GPS time. It is designed to receive periodic updates from an accurate GPS source, and fill in the remaining intervals using a std::chrono::steady_clock delta since the last GPS time was received.