This document describes Terragraph's algorithms for allocating prefixes to nodes. Network prefix validation and allocation is handled by either CentralizedPrefixAllocator or DeterministicPrefixAllocator.

Terragraph networks are given an IPv6 "seed prefix" (e.g. face:b00c:cafe:ba00::/56) from which subnet prefixes are allocated to all DNs and CNs. There are three different methods for allocating node prefixes with Open/R, described briefly below. For more details, refer to the Open/R documentation for openr::PrefixAllocator.

Both centralized and deterministic prefix allocation require initial parameters to be provided through the thrift::PrefixAllocParams structure in the controller config file:

seedPrefix, the prefix of the entire Terragraph network, is given in CIDR notation. allocPrefixLen specifies the bit-length of prefixes allocated to each node. If these parameters are not provided in the controller config, the controller will automatically revert to distributed prefix allocation.

Given a valid thrift::PrefixAllocParams struct, the controller is able to allocate prefixes for all the nodes in the network automatically. However, individual prefixes can also be manually defined through the prefix field in each thrift::Node entry.

The allocation steps are as follows:

Allocation is performed by iterating sequentially through all possible prefixes and assigning the first unallocated prefix. For example, if allocating /64 prefixes for nodes from the seed prefix face:b00c:cafe:ba00::/56, the controller would assign prefixes in the following order:

TopologyApp computes prefixes and periodically sends a SET_PREFIXES command to any reachable POP node's OpenrClientApp. If any prefixes changed, the minion injects the new prefixes into Open/R using the KvStore key e2e-network-allocations.

The CPA allocation is somewhat arbitrary. That is, no subnetting of the seed prefix occurs and each POP node is only able to advertise the entire seed prefix to BGP peers, rather than a more specific subnet. This makes it possible for ingress traffic to enter the network through a suboptimal POP node.

Deterministic Prefix Allocation (DPA) assigns prefixes to nodes based on a given topology to allow POP nodes to take advantage of route summarization and help load balance ingress traffic. DPA attempts to segment a TG network so that each POP site can advertise its own specific BGP routes. Ingress traffic will then automatically flow through the optimal POP, instead of tromboning between POPs. 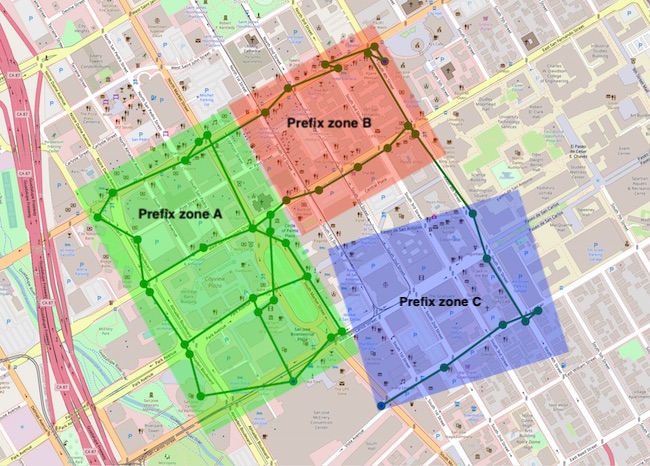 DPA begins by segmenting the network into prefix zones (one per POP site). This is accomplished by running a BFS algorithm starting from POP sites to find the closest POP site, in terms of hop count, to each node. Nodes closest to a specific POP site form a prefix zone.

Each prefix zone is allocated a number of prefixes so that the sum of their prefix spaces is at least as large as the number of nodes in the zone.

The recursive algorithm in pseudocode (Python) is as follows:

The recursive algorithm is best explained with an example. Assume the following set up (based off of TowerG data):

Since the seedPrefix is a /56, the seedPrefix has a prefix space of 256. In other words, this network can support up to 256 nodes, since each requires a /64.

Prefix zone C is satisfied since it has only 20 nodes. Since prefix zones A and C are not yet satisfied, recurse using the remaining prefix space of 64. Split the the network prefix space (64) equally (divide by 2) and assign the prefix spaces (32) to each zone:

Now, prefix zone B is satisfied, but prefix zone A is not and there is no more remaining prefix space. The algorithm reaches a dead end, so it backtracks to the previous state:

This time, instead of dividing by 2, the divisor is multiplied by 2 and we divide the remaining (64) by 4. Then, assign a prefix space (16) to each of the two unsatisfied zones:

Now, prefix zone A is the only unsatisfied zone and it can use the rest of the remaining prefix space.

All prefix zones are satisfied and the entire network prefix space has successfully been divvied up.

Next, the prefix spaces need to be converted to prefix lengths.

The prefix space to prefix length conversion is trivial:

Converting a set of prefix lengths into actual prefixes involves traversing a binary prefix tree from shortest to longest prefix.

Create a mapping from prefix length to prefix zone:

For each prefix length (from shortest to longest) and for each prefix zone that requires a prefix of said length, allocate a prefix from the prefix tree.

The tree allows tracking of previously allocated prefixes. Traverse the tree from the root, taking the left branch at each node. If an allocated prefix is encountered, backtrack and take the right branch. Note that this only works when prefix lengths are considered from shortest to longest.

The prefix tree concept can be replaced by a recursive function and a set containing previously allocated prefixes. See DeterministicPrefixAllocator::allocateZonePrefixesHelper().

During the prefix space allocation phase, multiple prefix spaces of the same size may be allocated to the same prefix zone. These prefix spaces can be merged into one larger space and is an implementation detail in PrefixZone::addToPrefixSpace(). This also makes the entire algorithm run significantly faster.

Currently, there is no convenient way to redistribute zone prefixes to allow for additional nodes to be added. To mitigate this, there is PrefixZone::allocationSizeOverride_ which overrides the initial zone size used for prefix space allocation. This override is configured with the controller flag dpa_zone_prefix_space_buffer. It defaults to 7, so 7 additional nodes can be added to a prefix zone before it runs out of prefix space. Additionally, there is an API endpoint /api/allocatePrefixes (or the ZMQ message type ALLOCATE_PREFIXES) that will redo the entire algorithm.

When using either centralized or deterministic prefix allocation, changing the network prefix becomes a multi-step process since the controller can lose reachability to the network when there is a mismatch between the allocated node prefixes and the network prefix advertised in BGP.

This can be solved by advertising both the old and new network prefixes in BGP during the transition. This can be done manually using the bgpParams.specificNetworkPrefixes node config field on any POP node.

Additionally, the controller tries to automate some of these steps. The following are the recommended steps to change the network prefix when either centralized or deterministic prefix allocation is enabled: