Absolute time and phase synchronization are essential for the correct operation of a Terragraph network. The time division duplex (TDD) slot architecture of the physical layer requires a timing precision less than the slot guard bands. In addition, absolute time is required at each sector for the derivation of the superframe number used for scheduling.

There are two possible approaches, explained further in the sections below:

The use of precise timing derived from a co-located GPS receiver meets timing requirements, but it does present trade-offs:

This document will describe the means to meet the network timing requirements through a design that minimizes the dependence on GPS visibility, while still meeting the timing precision requirements. The design accomplishes this as follows: 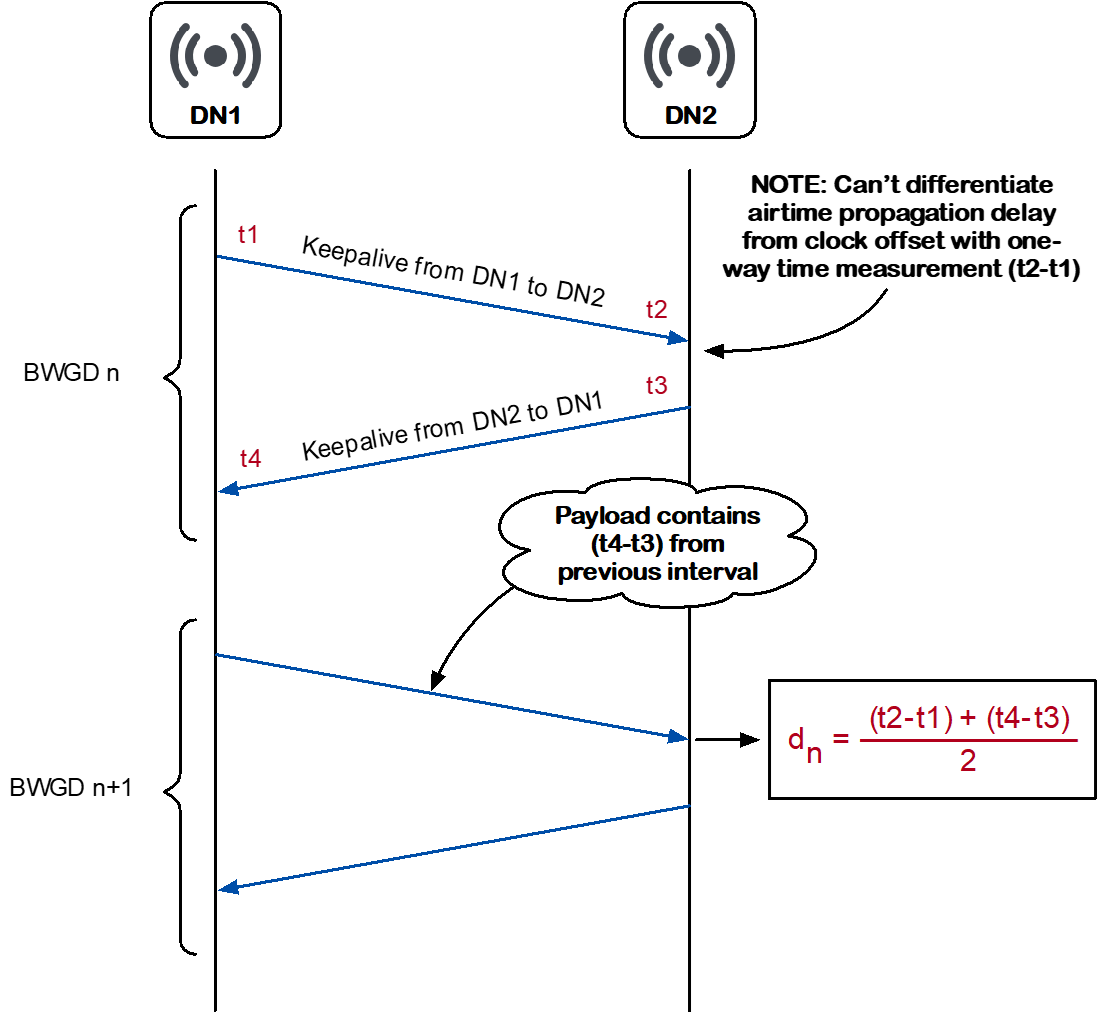 Sectors on downstream nodes are synchronized via a common 1pps signal going to all sectors on the node. Each second a SW-HTSF 1pps message is sent from the sector that is RF synced to all other sectors on the node. The common 1pps signal does not need to be phase or frequency aligned to the timing reference; all phase and frequency correction is done in software so only a fairly reliable local clock is required.

A node receives timing information in one of two ways:

The state machine for timing synchronization in firmware comprises three states, which are as follows (in order of preference):

Time samples are collected each second. The components of the time sample and its validity criteria and thresholds are defined as follows:

Other software layers may contain additional validity checks. For example, the u-blox driver used on Rev5 enforced the following conditions:

In order to ensure the synchronization of time slots for all sectors, the time to perform certain operations in a sector must be constrained. A guard time between slots provides the protection necessary to provide sufficient synchronization. Additionally, a delayed Tx slot start time is needed for successful reception of the first packet in the Tx slot.

The Timing Synchronization Function (TSF) is a 64-bit microsecond counter that is used as a measure of time for all MAC operations. The software allows and corrects finite drifts in the frequency.

In the "PPS sync" state, the Terragraph clock is precisely disciplined by an input timing source (e.g. GPS at typically 5ppb). Common sources of error include PLL (phase-locked loop) least counts and GPS oscillator offsets/uncertainties. The software uses a 1pps strobe to correct any drifts, and applies the correction once per second at every 1pps strobe. The successive 1pps strobes should be 1 second apart. Any difference is applied as a timing correction each second. The maximum correction applied is 20µs per second, allowing correction of timing drifts within 20ppm.

When a node is in the "RF sync" state, timing is derived from a peer node. However, timing errors can occur and accumulate at each hop, which degrades timing. Terragraph places a limit on the number of hops allowed from a timing source and controls the accumulation of timing errors by implementing the following constraints:

A sync state indicator (SSI) provides this information as follows:

The table below shows the link management actions for each sync state. In the current Terragraph implementation, X = 1.

Where applicable, the configuration of the GPS receiver on each DN is handled by the E2E controller. The E2E controller enables position-assisted GPS and minimizes the need for user input. Since the DN is immobile, it uses the "survey-in" feature to determine its own position. When a node is in "survey-in" mode, it surveys the sky for satellites from which to get its geographic coordinates (longitude and latitude). The node will remain in "survey-in" mode until:

Sectors must self-assert on GPS timing uncertainty greater than 0.5µs and revert to the "RF sync" state.

This section describes the timing architecture on Terragraph reference platforms, and how to support additional GPS modules.

Details from different Terragraph hardware revisions are summarized below.

Rev5 hardware uses the u-blox LEA-M8F GPS module. The module is connected over I2C, and NMEA message handling is done via an in-kernel driver (see recipes-radio/ublox-mod/kernel-module-ublox_0.1.bb). Timestamp messages are forwarded from the u-blox driver to the Terragraph driver, which sends them to the wireless firmware. Single satellite mode is achieved using the u-blox UBX-CFG-TMODE2 ("Time Mode") command.

Note that per u-blox specification, the GPS module is calibrated for a maximum drift of 100ppb after 24 hours of holdover (a mode of operation where GPS timing is temporarily maintained even after synchronization with GPS satellites is lost). This implies that the GPS holdover state of u-blox in the first few seconds after loss of GPS lock should be near precise.

Puma hardware uses the Telit SL869-T GPS module and TG2520SMN crystal. The module is connected over UART, and NMEA message handling is done via gpsd. Terragraph's driver-if connects to gpsd to receive timestamps, then forwards them over Netlink (as TGD_NLSDN_CMD_SET_GPS_TIME) to the Terragraph driver to send to the wireless firmware. Single satellite mode is achieved using the Telit $PSTMENABLEPOSITIONHOLD ("Position Hold") command.

Some functionality depends on a custom PPS source (default /dev/pps1) which asserts on ETS interrupts from QorIQ's PTP clock driver:

The SyncE PLL loop filter is implemented in the zl3079x driver as a PI controller, and is driven by phase error measurements contained in HTSF messages from Talyn firmware every BWGD (25.6ms) via the Terragraph driver. Support for the Ethernet Synchronization Messaging Channel (ESMC) protocol (ITU-T G.8264) is handled by the esmc VPP plugin (see recipes-facebook/vpp-esmc/vpp-esmc_1.0.bb).

The E2E minion (PTPClockHelper class) synchronizes clocks on the NPU and/or 10G PHY at each 1pps strobe as follows:

Requirements and instructions for supporting other GPS modules are described below.

It is recommended to use the gpsd architecture when possible; any GPS module that can output NMEA0183-compliant messages will work with gpsd. This requires fairly limited changes in the following places:

If the GPS module is not compatible with gpsd, an alternative is to write a kernel module implementing the Terragraph driver's GPS interface, found in recipes-radio/wireless-mod/files/nl-driver-if-hdr/fb_tg_gps_driver_if.h.

Stats about GPS state are exported from wireless firmware, the u-blox driver, and driver-if (when connected to gpsd). These are published by driver-if on a ZMQ port (see Stats, Events, Logs for details).

GPS stats from wireless firmware are shown in the table below.

A subset of GPS stats from the u-blox driver and/or driver-if are shown in the table below. These sources export a similar, but not identical, set of keys. u-blox driver keys are constructed in DriverIfUtil::processGpsStatus(), and gpsd keys in GpsdClient::getStats().

This section lists the node configuration fields related to the features described above. For more detailed specifications, refer to the config metadata file.

Instructions and considerations for deploying GPS-free Terragraph networks are given in the sections below.

The following examples highlight several topologies where OTA sync is fully, partially, or not supported.

Topology 2: This topology contains a Y-street, so not all scenarios are supported.

Topology 3: This topology contains a Y-street, so not all scenarios are supported.

Topology 4: This figure-8 topology does not contain any Y-streets so in general is supported with any node configured as the timing reference node. However, there are many possible ways for timing to flow, so to avoid timing loops any link going down may result in a complete re-ignition of other links in order to re-arrange the timing path.